Lamborghini have been at the forefront of motoring excellence for over half a century, and have a reputation for creating some of the most exciting cars ever made. They’re known for their great design philosophy, marrying smooth racing curves with harsh angular details to make some of the most unique and fascinating car designs in history.

They’re perhaps something of an acquired taste – some prefer their supercars to have a more refined look to them, and find the ostentation typical of a Lamborghini too much to bear. Others, though, revel in their mad glory – and the creative freedom they offer over their long term competitor, Ferrari.

Another thing Lamborghinis are known for is their speed. They look fast, and they move fast too. They’re a company known for consistently pushing for more extreme performance, as with their famed Aventador series. But what is the fastest Lamborghini ever made?

On the surface, it resembles an Aventador – which is no surprise, of course. It’s got the same rough outline – but there’s been some crucial tweaks here and there to get the most out of the aerodynamics. 217 mph is very, very fast already – and squeezing an extra 4 mph out of the car is no mean feat.

This is why it’s got a much, much pointier front end than the Aventador, as well as a modified exhaust system and larger air intakes. The changes they’ve made to the exhaust and intake system now mean that the engine can output a massive 740 hp at 8400 rpm.

This is obviously a huge part of getting the car up to ridiculous speeds – but the aerodynamic redesigns of the car are also crucial to this task. INdeed, Lamborghini are touting the Veneno as “having the aerodynamic efficiency of a racing prototype.”

That massive point at the front end is all about downforce – at these sorts of speeds you need all the grip on the road that you can get, so having that front end glued to the road with downforce is crucial. Two hexagonal openings move air from the front splitter to the upper of the car.

It’s designed to be fast not just in a straight line, but around corners too. It’s got the same carbon-fiber monocoque design as the Aventador, retaining also the aluminum front and rear subframe, and the pushrod suspension system.

All of these are again crucial to the high speed responsiveness of the Veneno – this is the Aventador, a car already known for being frankly ludicrous in almost all aspects, taken to extremes. And you can likely expect to see aspects of this design in future Lamborghini models – for instance, the “tail” like element above the rear window also features on the Huracán GT3 EVO 10th Edition. 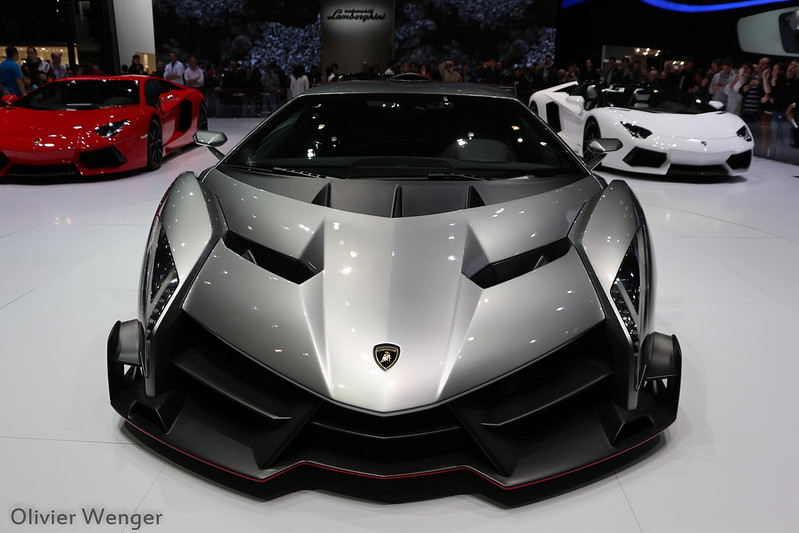 Can I Get One?

Good luck on that front.

It is an extremely rare car – you’ll be pretty unlikely to ever even see one, let alone own one! The Veneno was introduced at the 2013 Geneva Motor show, in celebration of the 50th anniversary of Lamborghini. In total, only four Veneno Coupé models were ever produced – one of which was kept by Lamborghini for the Lamborghini museum. The three that were sold were decidedly expensive too – Lamborghini charged a colossal $4,000,000 to own this extremely rare commemorative piece.

As a track-focused design, the Veneno isn’t exactly designed with normal driving in mind either, meaning it’s perhaps not the best purchase for a daily driver anyway.

There was, however, a roadster variant of the Veneno, and luckily for prospective buyers, they’re a little more easy to come buy – and are also cheaper to buy too! The performance of these is pretty much identical, although it does weigh 50 kg more than the Coupé model. It’s got an open top too – which would make it great for your commute to work on a sunny day!

All you’ll need for the Roadster edition of the Veneno is around $3.7 million dollars, making it a complete bargain in comparison. And with a whopping nine of them ever made, you’ve got three times the chance of getting the Roadster!

The Veneno was, as previously stated, released to commemorate the 50th anniversary of Lamborghini. Founded in 1963, Lamborghini (so the story goes) was founded due to a disagreement between Ferruccio Lamborghini, and Enzo Ferrari, founder of Lamborghini’s rival Ferrari.

Ferruccio Lamborghini was unhappy with the longevity of the clutch on his Ferrari – they broke too easily. Being an engineer himself, with a history of designing and successfully selling tractors, he knew how to fix it.

He approached Enzo Ferrari himself with his idea on how to fix the clutch, so that it would last longer. Instead of accepting the criticism and listening to Lamborghini’s advice, Enzo Ferrari rebuffed him rudely, telling Lamborghini “Let me make cars. You stick to making tractors.”

Ferruccio Lamborghini didn’t take kindly to this insult, and in his fury at the unwarranted rebuke resolved to make a company that made better cars than Ferrari – and, of course, without the clutch issues that Ferrari had.

Four months later, with the help of some disgruntled former employees of Ferrari. Lamborghini’s first car was somehow ready for display at the 1964 car show in Turin despite the mammoth task of designing and building a car from scratch in 5 months – proof of Lamborghini’s engineering skills, as well as the skills of the former Ferrari employees, who were fired by Enzo himself after a disagreement with the involvement of Enzo’s wife in the production side of the company.

Clearly, they all had a lot to prove to Enzo Ferarri about just what they could do, and what he’d thrown away.

There you have it – the fastest Lamborghini ever made. Until the next one they make, of course – after all, it’s not likely they’ll stop anytime soon!