Bentley is a name that conjures up a set of images and associations among people who hear it.  It makes us think of class, elegance, sophistication, and luxury.  Bentley’s cars have more than earned their fame and reputation, but they’re so good that the company’s trucks are less well known.

That’s a pity, however, because their trucks are every bit as good as their cars are.  If you’re in the market for a Bentley truck, you’d be well advised to think about how much your dream vehicle will cost.  Look no further than this article in helping you find out!  We’ll have a look at some Bentley trucks here to get you clued up on what kind of outlay you’re looking at if you want to buy a beautiful Bentley.

There are quite a few options to choose from when it comes to Bentley trucks.  The company doesn’t offer anything like a pickup truck, but what they do have is the Bentayga SUV.  This comes in four varieties: the Bentayga Hybrid, Bentayga V8, Bentayga S, and Bentayga Speed.  Let’s have a look at the range overall, and then individually.

The Bentayga range is Bentley’s first foray into the world of SUVs and is a pretty impressive offering.  All of the variants are quick, handle better than you might expect of such a large vehicle, and don’t skimp on that classic feeling of luxury that you’d expect from a Bentley.

Bentayga Hybrid: This is the cheapest entry in the Bentayga range, so if you’re looking to get one on a budget, this would be your best shot.  Don’t start getting ideas that you’re going to get one cheap, though – even these will set you back a fair bit.

As the name suggests, this one has a hybrid engine.  It’s powered by a 3.0L V6 petrol engine in combination with an electric motor.  This means that it can travel up to a maximum of almost 40 kilometers on electric power alone.  This could be very useful if you just need to drive it a few miles to take the kids to school or do some shopping.  It’ll reach a maximum speed of

Bentayga V8: This one has a full V8 engine rather than the V6 in the Hybrid.  As a result, it performs better when it comes to acceleration and top speed.

Bentayga S: This is the ‘classic’, core of the Bentayga range and it matches the V8 for speed.  The prices are also fairly similar, and these two have more in common than either does with the other variants in the range.

Bentayga Speed: This is the fastest in the Bentayga range, and the fastest SUV Bentley has ever made.  The power, transmission and suspension are specifically configured with performance in mind.

All of these four variants also have different iterations from each year they were introduced.  As you would expect, the newer models are more expensive than the older ones, which are often now sold second hand. 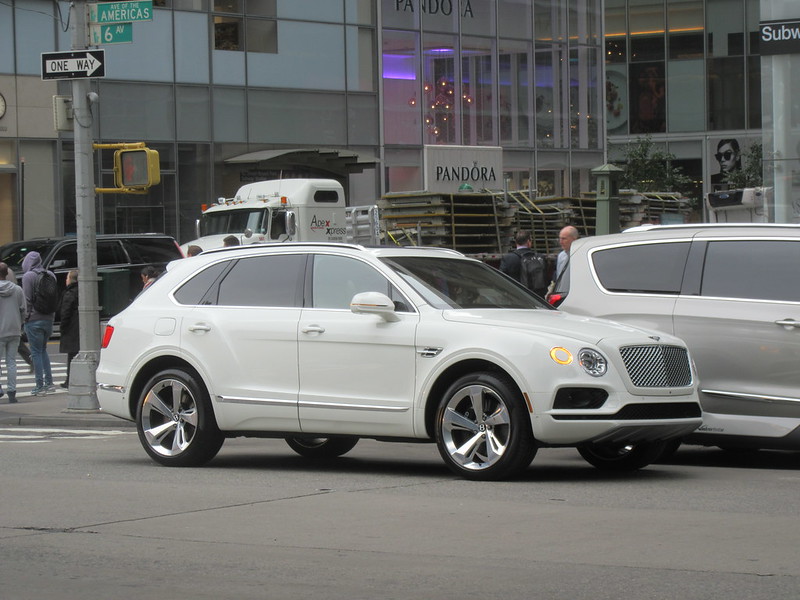 It’s common nowadays for cars to be sold with a wide range of optional extras and the Bentayga range is certainly no exception.  Would you like contrast stitching on your seats?  Ten-spoke wheels?  Smoked windows?  Or how about a built-in entertainment system?  All these things and more are possible but, of course, you’ll pay for the privilege.

The list of options is in fact extremely long and if you decide that you want a significant number of them, you’ll quickly find that the price of your car is rising far beyond the basic cost.  There is also a specific set of options that Bentley itself recommends, ranging from basic things like a load-assist tray in the trunk to an automatic garage door opener.  What you think you’ll need is up to you.

Naturally, this varies between different models, but another thing you’ll want to think about when it comes to how much a car costs is how much you’ll need to spend fueling and running it.

As it happens, the cost of running a Bentley Bentayga is pretty high.  The V8 petrol version is rated for 23 miles per gallon, which means you’re going to be burning through quite a lot of fuel.  The hybrid version offers better mileage if you’re using the electric motor but when it runs dry, the miles per gallon rating is 21 – even worse than the V8 petrol engine.  This being said, most people who are considering buying a Bentayga are probably willing enough to absorb the high fuel costs.

As with cars generally, it is usually cheaper to buy something second-hand than it is to buy anything brand new.  Prices for Bentaygas on the second-hand market vary wildly, but you’re not likely to find much below the $100,000 mark, though it’s not impossible.  $150,000 second-hand models are fairly common, though they can go up to $250,000 and even $350,000 and beyond.

Remember also what we said about the optional extras.  There are a huge number of them and if you’re looking for a second-hand model, you’ll be very lucky to find a model which has the exact combination of features that you’re after.  You might be able to come close, of course, but if you’re a perfectionist, buying new might be the only way to get exactly what you want.

Most second-hand Bentaygas will cost more than this, though, from $150,000 and up being fairly common.  The rest will be decided by which specific variant you’d like and which additional extras you’re willing to pay for.