Quattro is a sub-brand of the car manufacturer, Audi, to apply to their four-wheel-drive cars. The word itself ‘quattro’ just derives from the Italian word for the number 4. Audi started using the term in 1980 when it was introduced with Audi’s four-wheel-drive racing car.

The term quattro can now be seen as a badge fitted onto some of Audi’s more modern cars and RS models. Such as the Audi TT, the RS3, the R8 supercar, and many more. Audi even has improved and varied models of the Quattro system to configure different cars. But the history of the term goes beyond just four-wheel-drive.

History of the Quattro

In 1977, Audi’s chassis engineer, Jörg Bensinger proposed the idea for a four-wheel-drive car that could also give high performance. This idea came on when he realized that the 1.6 liter Volkswagen Iltis, a small military vehicle built for the German military, could out-perform any performance car in the snow, no matter how powerful.

Bensinger and Audi then got to work on a variant of the Audi 80 with a four-wheel-drive system that wasn’t heavy or inefficient and could be used in sporting events. They did this by hollowing out the secondary shaft in the transmission.

This allowed power to flow through in two directions. It could then drive 50% of the power along the prop shaft to the rear axle and then the other 50% of the torque was transferred to the front axle’s differential. This made the all-wheel-drive system light, compact and tension-free allowing it to be used in your everyday car and not just the slow, all-terrain military vehicles like the Iltis.

The Audi Quattro was released in 1980, a 200hp coupe with a box-like shape. Audi wanted to see the effects the Quattro would have on the sport of rallying. So far, the rally world was dominated by rear-wheel-drive cars, cars such as the Lancia Stratos, the Ford Escort, and the Fiat Abarth.

The Audi Quattro quickly shot into the limelight in 1980 thanks to Hannu Mikkola. To test the Quattro’s rallying capabilities, Audi asked Mikkola to test the Quattro at the 1980 Algarve Rally as a zero car. This was Audi’s first competitive test with the Quattro system. The rallying world was blown away. The Quattro won 24 out of the 30 stages, only being beaten on the tarmac. If the Quattro wasn’t a zero car it would’ve not only won the rally but won it by 30 minutes.

The car then went and made its World Rally Championship debut in 1981 in Monte Carlo and finished the first 6 stages with a lead of almost 6 minutes before having to retire the car with damaged steering. For the next 6 years, the Quattro dominated the rally scene until group B rallying was banned.

In 1981, Michéle MoutonIn became the first female driver to win a world championship rally, she did so behind the wheel of a Quattro. In 1984, Audi debuted the even quicker Sport Quattro that had a whopping 106 more horsepower than the original. By the banning of group B rallying, the Quattro had grown this number to 590hp. 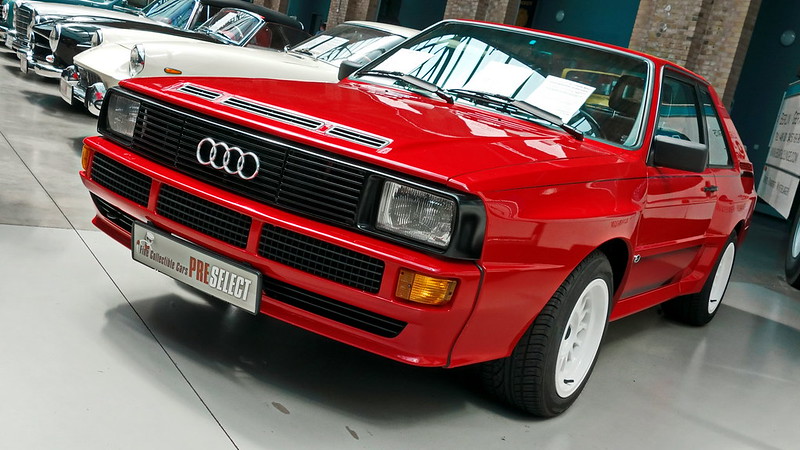 Audi has shifted their focus onto using the Quattro system in production cars in the modern era. That’s not to say their racing pedigree has dwindled as the Audi A4 still uses the Quattro system to dominate the European touring car scene.

This system is designed for models that have the engine mounted across the chassis. Because of the weight the engine puts onto the chassis, the system has a bias toward the front wheel but constantly analyses traction.

With new Quattro technology, it can then send as much power from the front wheels to the back when it’s needed.

The self-locking center differential divides the torque equally between the rear and front wheels with its 50:50 power bias. This system also constantly analyses the road conditions and automatically balances your power if needed.

Some of the sportier Audi models, such as the RS range will have a bias toward the rear wheels to increase driving pleasure.

The Quattro on-demand system works by switching the power between all-wheel-drive and front-wheel-drive in an instant by monitoring the road conditions, driving dynamics, and driver behavior. As a result of this, the Quattro on-demand system is greener than any other system. Potential CO2 emissions and fuel consumption is reduced compared to a car with permanently engaged all-wheel drive. However, you still have the benefits of all-wheel drive when needed.

Thanks to the versatility of the modern Quattro system, Audi has a variety of models that you can get with Quattro, such as the S3, A5, A6, Q3, Q5, Q7, TT, and the Audi R8. Many more of Audi’s models have been designed so you can configure with the quattro system, including their electric range.

The term ‘Quattro’ does just mean four, but its rich history means that to the car lover it means so much more, it means rally and snow, it means touring and the fantastic moments all of that brings such as the 1980 Algarve.

The new Quattro system helps save on CO2 emissions and tries to make our planet that little bit better. The Quattro system revolutionized the way we drive cars and is still constantly improving today to change the way we look at cars.