Audi is one of the world’s leading car manufacturers and is known for its focus on quality high-performance cars, with a particular focus and pedigree in 4 wheel drive and rally performance.

However, after merging with Volkswagen, Audi began several new projects, one of the most exciting being the Audi R8, which attempts to take Audi’s knowledge and expertise and use it to create a high-performance supercar that delivers amazing speed, stability, and reliability with striking looks and some amazing features.

For anyone interested in high-performance cars, the number one question is often how fast can it go? After all, there are a certain amount of bragging rights to be had knowing that your car can outrun most other cars on the road.

However, it can be hard to find good information about specific cars like the Audi R8, particularly as this model has several different versions and variations that mean there can be substantial differences in the performance statistics and information available, depending on the specific version you’re interested in.

In this guide we’re going to highlight some of the key information to know about the R8 and its main variations, looking at speed, design, bhp, acceleration, and other key performance factors to give you a better understanding of the car and its amazing performance.

How fast is the Audi R8?

The Audi R8 is a very fast car, able to reach speeds of over 200mph, a barrier which very few cars can claim to surpass.

200mph puts this car among the fastest cars ever made, and there are several different versions of the car, some of which are capable of even more performance adding several additional mph to that already mighty figure.

The beauty of the R8 is, unlike a lot of other supercars, it’s all-wheel drive, or 4 wheel drive, indicating the true Audi pedigree this car aims to uphold. Putting down 200 mph in an all-wheel-drive car feels very… assured, as all the wheels work together to deliver the torque and power to the road evenly and effectively, giving the car insane grip and excellent acceleration, while also being controlled.

A lot of fast cars have a sort of, frenetic feel to them, much like how fighter jets are purposely designed to be unstable in the air for greater maneuvering speed. The R8 however brings a much more, perhaps typically German, sensible approach to 200mph speeds and masses of horsepower. 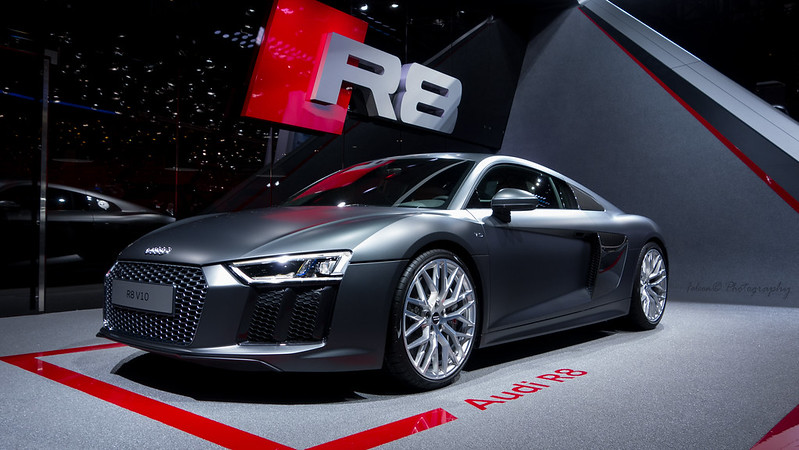 When was the Audi R8 Made?

The first Audi R8 was released a surprisingly long time ago now, back in late September 2006, which for some of us may feel like only yesterday.

Indeed, it’s incredible to think that this car is fast approaching 20 years in production, and indicates just how popular and successful this project has been for Audi and for motorists.

How many versions of the Audi R8 are there?

There are three main versions of the Audi R8 currently available… the R8 V10 Quattro, the R8 V10 Performance Quattro, and the R8 V10 RWD, which goes for a more traditional rear-wheel-drive format to create a little more drama and fun for people who find the four-wheel-drive a little too safe and sensible.

The R8 occupies a very popular place in the market and has been continually updated and tweaked by Audi over the years to keep performance, as well as appearance, up to scratch and competitive with other popular and new designs.

The convertible is truly a gorgeous car, and the hardtop brings a real sense of sophistication that not a lot of sports cars can create.

What engine does the Audi R8 Use?

The Audi R8 currently in production runs a base 5.2-liter V10 engine, and a slightly more powerful tuned V10 also, which creates an immense amount of speed, power, torque, and acceleration.

This is actually a big upgrade on the original models, which had a 4.2-liter V8 engine that offered slightly less performance overall.

As the car became more popular and demands for more performance were placed on it, the R8 was upgraded to a full line of V10s, which offers a nice compromise between the lighter weight and maneuverability of the V8, with the smoothness and raw power you get from something closer to a V12.

And while there are faster cars on the road, the R8 is absolutely no slouch, particularly the newer models with upgraded engines.

A few slightly more expensive and higher power V12 supercars will no doubt leave the R8 in its dust, but among most sports cars the R8 can ably hold its own, even with the added weight of the 4×4 system.

It can be difficult to give accurate timings for the 0 to 60 of a car, as there are many factors that can affect this, from weather and track/testing conditions to the driver, the version of the car, and even the choice of tires and other specifications.

Officially, the R8 is capable of reaching 0 to 60 mph in around 3 to 3.7 seconds, which is very sharp and puts it among the fastest accelerating cars available. However, the real threat of the R8 is the way in which it accelerates, with incredibly forceful and stable acceleration that is super efficient thanks to the 4×4 system.

How much horsepower does the Audi R8 Have?

The top version of the R8 has a stunning 602 bhp provided by the updated and upgraded V10 engine, which sounds incredibly satisfying and doesn’t waste a single horsepower due to its torque and grip.