I love Dodge, I’ve had a good relationship with these guys – Robby Gordon

Just like Robby Gordon, we love Dodge. But unlike Gordon, our love affair with the company that helped to put American muscle on the map didn’t start on the racetrack, it began with ‘Bullit’ and ‘Vanishing Point’, the films that made the Charger and the Challenger cinematic icons. As soon as we saw those cars, it was game over for us and we made a vow that one day we’d put our foot through the floor and feel the surge of power while sitting behind the wheel of our own Charger.

Growing up in the eighties, meant that we had to watch the fifth generation of the once mythical Charger almost completely trash its hard-won reputation, and following the five-year disaster period that tarnished the car’s name, Dodge gave up and finally laid the Charger’s ghost to rest. But it’s hard to kill a legend, and after a twenty-year absence, Dodge finally revived the Charger in 2006 and its R/T (that’s Road / Track) and SRT models re-entered the muscle world with a vengeance. The Charger was well and truly back.

Oh What A Tangled Web We Weave – Dodge Skunkworks

That should have made our Dodge decision an easy one, and if it hadn’t been for Dodge’s skunk works division, we’d have definitely laid our money down for a seventh-generation (the then 2011 onwards model Charger) R/T car. But then they had to go and make things even more difficult in 2015 when Dodge introduced the bone-shattering and game-changing Charger SRT Hellcat.

Debuting in 2014, the Charger SRT Hellcat boasted a new, lowered front end and redesigned grill and was, and still is according to Dodge, the fastest four-door saloon car ever built. And the reason it went, and continues to go, faster than any other road-going “family” car (if it’s got four doors and front and rear seats that makes it a family-friendly vehicle as far as we’re concerned) is the 6.2 liter supercharged Hemi V8 that powers it.

Sure, the 707 horsepower engine that comes as standard with the Hellcat means that you’ll have to pull over at every other gas station in order to satiate the cars thirst for fuel, but it also means that as soon as you push that pedal to the floor and the supercharger begins to whine, you’ll be forced back into your seat as the speedometer begins to climb faster than Spider-Man chasing the Green Goblin and the incredible acceleration summons every G-Force powered Genie in the world to push your face through the back of your headrest.

And the Hellcat’s speedo will keep on rising, providing you have enough road to race down, all the way to two hundred and three miles per hour. That’s right, Dodge made a road-going family car that can break through the mystical two hundred miles per hour barrier, which puts a whole new slant on the school run. Not that we’d recommend that you do the school run at that sort of speed, or even attempt to. 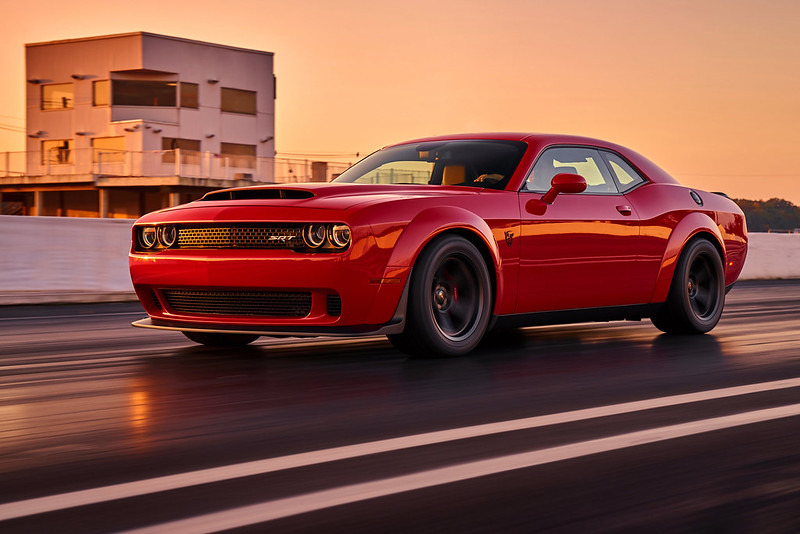 Chased By Monsters – The Dodge Demon

And then in 2020, Dodge upped the ante for the Charger SRT and reinvented the car and what it could again. Actually, that’s not true, they just tinkered with the Hemi power plant and managed to squeeze eight hundred and eight horsepower out of it. Having increased the number of horses that the Hellcat engine could produce by another one hundred, mainly thanks to the addition of a new supercharger and some tinkering with the motors ECU, Dodge needed a new name for their fearsome beast, and as it sounded and felt like it was screaming it’s way out of Hell whenever anyone drove the car, Dodge decided to call their new model SRT, the Demon.

How Fast Is The Dodge Demon?

If you jumped behind the wheel of a car that had just come straight off the showroom floor and put your foot through the floor, the Demon would max out at around one hundred and sixty-eight miles per hour.

We know, given the extra horsepower it sounds like a slightly disappointing number when the Hellcat can crack two hundred miles per hour and its motor makes less horsepower than the Demon does. But there’s a reason why a factory line Demon won’t push past one hundred seventy miles per hour, and that’s because Dodge deliberately limited the top speed that the car could, and can reach.

Why did they rein it in? Because the tires that that Demon is fitted with on the production line, the Drag sized Radials, can’t keep up with the motor, and when the Demon pushes toward the speed that it can actually reach, the tires begin to disintegrate.

But if you change the tires, remove the ECU governor, and have between two and a half and three miles of open empty road, then you should be able to take the Dodge Demon all the way up to two hundred and eleven miles per hour. That’s faster than a Bugatti Veyron which has almost two hundred more horsepower and used to be the fastest road-going car in the world until the Demon decided to ride up from Hell and steal its crown.

Speed Doesn’t Just Kill, It Also Costs. It Costs A Lot – The Final Word On The Dodge Demon

If you are thinking that maybe, just maybe the Demon is the right car for you, then you’re going to need to start recalculating your finances as this Ferrari and Porsche beating road monster costs just as much as its main competition does, and by the time you’ve remapped the engine and added the new tires into the equation, you won’t see a lot of change from one hundred and fifty thousand dollars.

And the bad news doesn’t stop there, as even though it’s legal to drive a Demon on the road, the NHRA has banned it from being used on the track, as it doesn’t meet their rigid safety standards. That means that unless you own your own stretch of a private road, there isn’t anywhere in America where you can legally take the Demon up to its top speed of two hundred and eleven miles per hour.